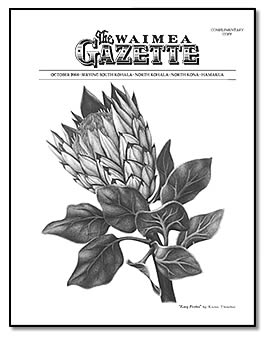 “Are you afraid to die?” a student asks Scott Fried, the guest speaker on Wednesday in his 9th grade Humanities class at Hawaii Preparatory Academy.  The student asks him this with round eyes, open to receive everything that Scott might give him.  Open to see certain truths that are being offered to him, perhaps for the first time, and in a voice not unfamiliar, not distant but present, today, in this lecture hall.  The students are still and silent as Scott, whom they know was infected with HIV 18 years ago, takes a breath in preparation to respond.

“Yes, and no,” he says honestly.  “More so before I saw my dad die.”  Two years ago, Scott’s father, in his final lesson to his son, taught Scott how to die.  Encouraged through 23 labored breaths,  David Fried took his last on an October afternoon in which Scott learned one of the many truths of his existence.  That there is a way to die with grace.  That there is a way to collapse into the arms of death, the way we collapse into the arms of a mother, of a close friend, of our lover.  “We are all living on a time clock,” Scott adds.  “I can just hear mine ticking.”  And what to do with that knowledge? Scott poses the rhetorical question and then immediately intones the answer: “I have to live harder, stronger, more.”

As a health educator invited to spend an entire week at HPA, Scott’s message was not only about AIDS and HIV, how they are contracted, what they entail, how they differ from one another.  It was about those illnesses as results of actions that are part of a much larger issue.  While AIDS itself may seem a vague and unlikely guest in any one of these teenagers’ lives, this issue is present and alive in every middle and high school community that exists today.  It is the issue of invisibility.  In his book, My Invisible Kingdom: Letters From the Secret Lives of Teens, Scott shares a host of letters by teenagers, written to him over his years of visiting schools, all of which, as Scott points out to his audiences, contain two commonalities: fear and the need to tell their stories.  In every letter, the words “I am afraid,” or “I’m scared,” appear in some form, and this fear is a manifestation, Scott teaches, of everyone’s need to connect with others.  It is a manifestation of the need to be seen, witnessed, recognized and loved, so intensely present during adolescence. The second commonality, the desire to tell their stories, is an even more obvious manifestation of that need.

“We all want to hear the words, ‘I see you, I notice you, I remember you, I understand you’,” Scott urges, and it is a truth too often overlooked by adults, whether we are parents, teachers, aunts or uncles.  We forget the emptiness that we felt when we were their age, and as parents especially, we think it is our job to fix what is not right for our teenage children.  We want to solve their problems, make everything better somehow.  In this, we fail our children, Scott explained on Friday night to an auditorium of parents from the community.  In attending, they had responded to the call of a flyer that said, “Everything You Ever Wanted to Know About the Secret Lives of Your Children (Without Reading Their Diaries).”  The emptiness felt in adolescence is inevitable, he said, and it is something they need to feel.  “My theory,” he went on, “is this: there is a sense of loneliness and isolation in every teenager’s soul that has to happen.”  He shared excerpts of letters from teens that explained why they did things that hurt them.  From cutting to binging and purging to getting drunk and high¼teenagers described their behaviors as ways to validate themselves.  To feel and, paradoxically, not feel, that emptiness that is so unnameable and yet so real, and which we, as their parents and sometimes as their teachers, want to fill somehow.

“I have pulled out almost all of my eyelashes—,” one teen writes to Scott, “my most beautiful feature.  My life is not perfect.  I need that to reflect on my body.”  The fear is of being misunderstood, misconceived.  The desire is to share or express something of her story, as grim as her mode of expression may appear.  How we respond as the adults in our teenagers’ lives is critical.  Perhaps we can receive their message before it becomes as desperate as a need to cut oneself or pull out one’s eyelashes.  We can see them, acknowledge them, and be with them in their loneliness, in their hurt.

The last thing I want to hear is, ‘There are other fish in the sea’,” 19 year old Nathan writes, because this statement, as well intentioned as it may be, is a negation of the loss that he is feeling right now.  “No,” Scott told a spellbound audience at Gates auditorium Friday night, “what they need is for someone to sit next to them in their pain, to hold it with them, say, ‘Yeah, I see it, it’s heavy.  I remember when I had mine’.”  He shared the story of how his mother cried for him on his brother’s wedding day.  At the top of the stairs in his mother’s house on the morning of the wedding, she stopped what she was doing and saw him.  She saw her son in his tuxedo, the best man without a date, and she cried for him.  “Oh my God, you’re so lonely,” she intoned, and there it was.  He had not even been able to identify his sadness, where it came from or why, but in recognizing it, in seeing it, “she cried my tears,” Scott said.  “She held my loneliness.  She made it easier to have.  She gave me courage to have it.”

At the end of his lectures, there is silence, but it only takes parents, teens, teachers, whoever his audience happens to be, a moment to hold up their end of the bargain he has made with them.  They will ask questions without holding back, in return for what he gives them, which is essentially, his self.  He shares himself with them, his story, his life, how he became infected with HIV at 24 years of age the very first time he had unprotected sex.  How he will forever endure the fallout of that first and most significant mistake.  “What I wanted was to be held,” Scott writes of that first sexual encounter in My Invisible Kingdom, that first and deadliest mistake.  “What I wanted was to be loved.  What I wanted was to be witnessed and validated, received and remembered” (23).  We can witness our children.  We can validate them, receive them, remember them.  Scott urged the parents to go home Friday night and “put your hand gently on your teenager’s face and say these words: How long can I stay with you?  I see you.  I like what I see.  How long can I stay with you?”

“It’s okay if you don’t understand them,” Scott encouraged, “if you’re a little bit scared of them.”  His message was for us to simply be with our teenagers.  See them.  Receive them and help them to be with their sadness, their emptiness, their pain.

In his final session with students, Scott led a Theater Arts class in singing a song by David Friedman called “We Live on Borrowed Time,” interjecting between the verses poems that they had written in response to three prompts: “Dear HIV,” “If I grow up¼” and “If my friend had AIDS.”  The result was the harmonious, poignant music of growth and of teens connecting with one another, with Scott, and with truths so real and so present that they brought tears to the eyes of each participant and to each of us who had the opportunity to witness it.  “You were never alone,” one HPA senior wrote, as if to one who had chosen death, “[you] just needed to open up your eyes, and you would have seen people seeing you, hearing you, believing in you, and if you had you would have found all you were ever looking for.”  Another student wrote in the voice of an AIDS patient: “We’re all going to die, I just got moved to the head of the line¼We are so alone, together.  I’m going to beat this death machine.  Don’t leave me now, I need you.”

And all of the students’ verses were recited in between their singing of the verses of the song whose chorus declared, “Yesterday is past, tomorrow seems a million miles away.  I promise you that I’m gonna’ make the best by living every moment, every hour, every day.”  More than anything else, in the openness of the students, their willingness to share with Scott and ultimately with each other, it was clear that they had received his message.  They had heard and seen the visible, breathing and very alive man who had come to give them something rare and beautiful: the affirmation that they were not alone, that they could embrace their sadness and move through it, and that there were people in whose figurative arms it was safe to fall: parents, teachers, counselors, family friends.

Finally, Scott left his audience with a charge, a call to action.  On Friday night, in his final lecture open to the community, a girl of about 15 asked the question, “How do you get AIDS?  What is it like and does it hurt?”

Without judgment, Scott translated her question. “When a teenager asks me this question, what she is really asking me is, ‘How do I stay alive’?”  We are failing, Scott explained, if our children do not know the answer to this question.  The call was, as a community, as parents, and as schools, to be sure our children know how to stay alive.  One parent astutely pointed out that “100 per cent of our children will not go to college, but 100 per cent of them will become sexually active.”  Yes, and what are we preparing our children for, if not to live?

The impact of Scott Fried’s visit this fall to the Big Island will of course be immeasurable.  How do we measure the difference between believing you are alone in the world and understanding, for once, that what you experience is essentially universal among teens?  How do we measure the difference made by the parent who, encouraged by Scott to “go ahead and hover!” keeps attending every basketball game and insisting that her son share the after-game meal with her?  How to keep track of what happens in the life of the students whose teacher, inspired by Scott’s talk to the HPA faculty, chooses not to dissociate, as easy as it is to do so, and to see what is not readily presented to him in the members of his class?  It’s not possible, we know, and yet the ripples of Scott’s visit will certainly be felt, perhaps for years to come.

A young woman whose poem appears in Scott’s book writes of the kind of the healing that it is possible to achieve, and her words speak to the injunction that Scott brings to every audience he touches.  Not self-help, but self-acceptance.  Not fixing, but recognizing and sharing.  Not fear but faith:

The tears will continue

And I will still be afraid

But the fear changes¼

My happiness will have to be a promise to myself

A promise to allow the sadness

A promise to not ignore the fears

A promise to know when it is okay to go back

A promise to know when I must go forward¼

A promise to heal.

A huge mahalo to the man who brought us messages from the “invisible kingdom” and to every adult and every teen who heard what he had to say.