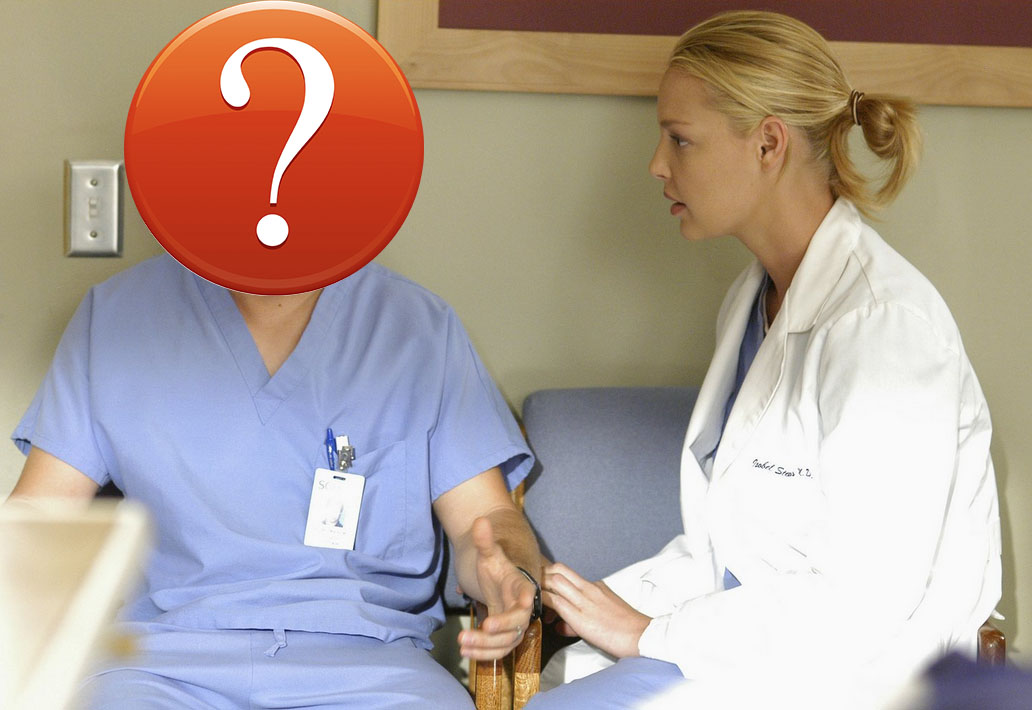 All rights reserved by ABC

Who remembers where this quote is from?

“You gave me syphilis?”

Answer: Grey’s Anatomy – Season One, Episode 9. George discovers he has syphilis, and it soon emerges that the disease is rampant among the hospital staff.

Well, just last week, the CDC (U.S. Centers for Disease Control and Prevention) announced that syphilis has returned with a vengeance to the gay community. Once almost eliminated in the United States, cases of syphilis have more than doubled among gay and bisexual men since the year 2000.

So this week’s STI topic is all about syphilis.

Syphilis is caused by a type of bacteria known as a spirochete, called treponema pallidum that lives in warm, moist parts of the body such as the mouth, anus and penis. If you were to look at it through a microscope, you’d see something that looks like a corkscrew or spiral. It’s extremely small and can live almost anywhere in the body.

How Is Syphilis Spread?

In its early stages, syphilis is easily treatable. However, if left untreated, it can cause serious problems — even death. So it’s important to understand as much as you can about this disease.

How Long Until Symptoms Appear?

A person who has been exposed to the spirochetes that cause syphilis may notice a chancre from 10 days to 3 months later, though the average is 3 weeks. If the syphilis is not treated, the second stage of the disease may occur anywhere from about 2 to 10 weeks after the original sore (chancre).
It’s important to keep in mind that many people never notice any symptoms of syphilis. This means it is important to let your doctor know that you are having sex, so that he or she can test you for syphilis even if you don’t have any symptoms.

So How Is It Diagnosed?

So this is where it gets interesting. Syphilis is divided into three stages, each with different signs and symptoms.

Primary Stage: Syphilis usually appears first as a red, firm, painless and sometimes wet ulcer or open genital sore, which disappears without a scar. “It can appear in the back of the throat and be missed entirely,” according to Dr. Demetre Daskalakis, an infectious disease expert at Mount Sinai Hospital in New York City. This first phase is the most infectious stage.

This chancre (pronounced: SHANG-ker) appears 3 weeks to 90 days (up to 12 weeks) after infection either on the penis, scrotum, mouth, back of the throat or anus. It’s often misdiagnosed as a herpes sore. It then scabs over and heals. Also, the glands nearest to the sore (neck or groin) may swell. Treatment of the sore with antiseptics or antibiotic creams has no effect since the treponeme has already infected the nearby lymph nodes. The sore is usually painless (as are the swollen nearby lymph glands) and feels like a small hard button just below the skin surface. It varies between barely visible to the size of a small fingernail.

The primary chancre is usually a single ulcer that is hard to miss when found on the penis but difficult when on the vulva, vagina or cervix, or in either gender when near the anus. A chancre can be found on the lips, nipples, tongue or other sites. One unlucky site is the base of the penis (called a “condom chancre”) when a sore on the vulva has come into contact with the lower part of the penis NOT covered by the condom.

The chancre will disappear on its own in 1-6 weeks (3 weeks average) but the disease doesn’t go away. In fact, if the infection hasn’t been treated, the disease will continue to get worse.

The primary sore is still present in perhaps 15% of secondary stage cases.

Secondary Stage: About 3-8 weeks after infection, the bacterium has spread throughout the body. A rash appears in most people on hands, palm and the soles of the feet. It might seem like this rash is the most important problem. But the treponeme can be found affecting all the parts of the body, from the liver to the lungs and the brain to the bones. People with secondary syphilis feel generally unwell, with a temperature, aches and pains, and loss of appetite. Half have enlarged lymph glands. Other symptoms are condylomata lata (fancy term for wart growths), lymph node enlargement, spotty baldness/hair loss, mild fever, fatigue, ulcers in the mouth and anus, and weight loss. There is an involvement of the central nervous system in 20% of cases, with nothing more than a slight headache.

Sometimes the rashes associated with syphilis can be very faint or look like rashes from other infections and, therefore, may not be noticed. Remember, sores sometimes appear on the lips, mouth, throat, vagina, and anus — but many people with secondary syphilis don’t have sores at all.
Secondary symptoms may last 2 to 6 weeks (4 weeks average) and may recur. The symptoms of this secondary stage will go away with or without treatment. But if the infection hasn’t been treated, the disease can continue to progress. Syphilis is still contagious during the secondary stage.
After some weeks, the rash and other complications disappear and the disease enters its next stage.

Early latent stage: If syphilis still hasn’t been treated, the person will have a period of the illness called latent (hidden) syphilis. This means that all the signs of the disease go away, but the disease is still very much there. Even though the disease is “hiding,” the spirochetes are still in the body. This stage can last for 2 years without signs or symptoms although infectious bacteria are still present in the tissues. Syphilis can remain latent for many years. Chancres or rashes may recur in this early latent stage.

Late latent stage or Tertiary Stage: If the disease still hasn’t been treated at this point, some develop tertiary (or late-stage) syphilis. This means the spirochetes have spread all over the body and can affect the brain, the eyes, the heart, the spinal cord, and bones. Symptoms of late syphilis can include difficulty walking, numbness, gradual blindness, and possibly even death. One third of people reach this stage, also called neuro-syphillis. It can appear up to 30 years after infection. The good news is that there is no chance of syphilis being passed on in this stage. It’s also been found that many who have reached this stage can look forward to no further trouble from their infection and may die of old age or an unrelated condition. The lesion in tertiary syphilis is known as the gumma. A gumma results from blockage of small arteries and can cause spots and lumps or nodules in skin, tongue, bones, muscles and internal organs. These later manifestation of syphilis are very uncommon in the western world today. If untreated, there can serious damage to the nervous system, heart, brain and other organs. Sometimes no clinical signs, but vascular and neurological damage may be occurring.

There is something called a dark-ground or dark-field microscope examination that looks at a little fluid from the primary sore of the secondary rash. Also, serological tests measure the presence of antibodies in the blood.

– Treponemal antibody tests, TPHA, TPPA, FTA or EIA stay positive forever even after successful treatment. These continuing positive results simply say that the person has had the infection in the past.

– Non-treponemal antibody tests, VDRL and the RPR tell us whether the syphilis is still active, depending on how strongly positive the test is. This distinguishes between a positive treponemal test owing to older treated infection or a new infection.

How Is It Treated?

If you think you may have syphilis or if you have had sexual contact with someone who might have syphilis, see your doctor or gynecologist right away. It can sometimes be difficult to spot chancres. So it’s important to get checked on a regular basis, especially if you have had unprotected sex and/or more than one sex partner.

Someone who has been infected for a while will need treatment for a longer period of time. Unfortunately, damage to the body from the late stage of syphilis cannot be treated. However, even in the late stage, it is important to get treatment. This can prevent further damage to the body. Anyone with whom you’ve had unprotected sex also should be checked for syphilis immediately.
Being treated for syphilis does not make you immune. You CAN catch it more than once.

How Is It Prevented?

The best way to prevent any STD is to not have sex. However, for people who decide to have sex, it’s important to use protection. Latex condoms are effective against most STDs; however, if there are any sores or rashes, avoid sex until the person has seen a doctor for treatment.

If you’ve read this far, here’s some fun facts on the origins of syphilis.

Where did syphilis come from?
In David Barlow’s book, Sexually Transmitted Infections (The Facts), he explains that there are a few views as to the origins of syphilis in Europe. Some blame Columbus (actually probably his crew) for bringing it to Barcelona from North America in 1493. The siege of Naples took place the following year when some infected Spaniards joined France. By the spring of 1495 a dreadful plague had broken out. The English called it the French disease. The French called it the Italian disease; the indecisive Italians called it the French and Spanish disease, while the Spanish called it the disease of Hispaniola. Neopolitan soldiers labeled it Mal Franzoso, the French disease, in 1495. Their French opponents called it “the Neapolitan disease.” The Russians dubbed it “the Polish sickness.” The Poles attributed it to Germany. The Japanese named the sores “Chinese ulcers.” And it was known for centuries as “the great” (as opposed to the “small”) pox.

Medieval cities banished syphilitics outside their gates or “cured” them with mercury ointments that made their bodies shake and teeth fall out before they died. The pre-Columbians school argues that it was around in Europe in pre-Christian day. There are many references in the Old Testament to conditions with signs and symptoms that could be syphilis. One translation, from Psalms, threatens ‘…the Lord shall smite you in the knees and in the legs with a sore botch that cannot be healed from sole of thy foot to the top of thy head.’