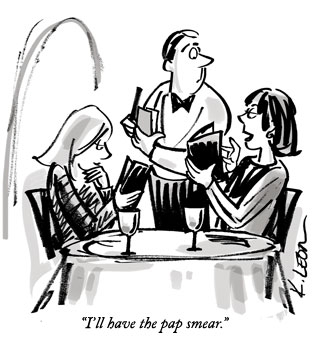 Fun fact: The Pap smear is named after the physician George Papanicolaou, who introduced this technique in 1949.

This week’s STI topic is dedicated to Mr. Pap, because his technique is used as a way to diagnose trichomoniasis.

Trichomoniasis, one of the most common STIs, and often excluded from STD education, is caused by a protozoan parasite called trichomonas vaginalis. That’s why it’s sometimes given the name “TV.”

This parasite can live in the urogenital tract of males and females and infect any sexually active person, especially those who are not using protection or who have multiple partners.

How Common is Trichomoniasis?

Trich is considered the one of the most common curable STIs. Over 180 million cases of trichomoniasis occur worldwide per year. In the United States, an estimated 3.7 million people have the infection, but only about 30% develop any symptoms of trichomoniasis.

The highest number of cases are seen in women between the ages of 16 and 35. Infection is more common in women than in men, and older women are more likely than younger women to have been infected.

How Do People get Trichomoniasis?

The parasite is passed from an infected person to an uninfected person during sex. In women, the most commonly infected part of the body is the lower genital tract (vulva, vagina, or urethra), and in men, the most commonly infected body part is the inside of the penis (urethra). During sex, the parasite is usually transmitted from a penis to a vagina, or from a vagina to a penis, but it can also be passed from a vagina to another vagina. It is not common for the parasite to infect other body parts, like the hands, mouth, or anus because the parasite cannot survive in the mouth or rectum.

It is unclear why some people with the infection get symptoms while others do not, but it probably depends on factors like the person’s age and overall health. Infected people without symptoms can still pass the infection on to others.

What are the Symptoms?

Symptoms of trich can appear as early as 5 days after sex with an infected partner. Some people with symptoms get them up to 28 days after being infected, but others do not develop symptoms until much later. Symptoms can come and go. Trichomoniasis often goes undiagnosed because about 70% of infected people do not have any signs or symptoms.

In females, symptoms can include:

If you’re a female, it’s important for you to recognize both a normal vaginal discharge (it’s usually clear or whitish, has no bad odor, and causes no irritation) and one that might signal a problem.

Normal vaginal discharge has several purposes: cleaning and moistening the vagina, and helping to prevent and fight infections. Although it’s normal for the color, texture, and amount of vaginal fluids to vary throughout a girl’s menstrual cycle, some changes in discharge may indicate a problem.

Symptoms in men:
Trich is not very common in men, and males who have trichomoniasis often don’t show any symptoms, but if they do, symptoms can include:

Men may also be treated if they have ongoing symptoms of urethral burning or itching despite treatment for gonorrhea and chlamydia. The infection in men usually goes away on its own in a few weeks.

Occasionally, some men with trichomoniasis may develop prostatitis (swelling and irritation of the prostate gland) or epididymitis (swelling of the epididymis, the tube that connects the testicle with the vas deferens) from the infection.

How Can You Prevent Trich?

When properly and consistently used, condoms decrease the risk of STIs. Latex condoms provide greater protection than natural-membrane condoms. The female condom, made of polyurethane, is also considered effective against STIs.

Using douche can actually increase a female’s risk of contracting STIs because it can change the natural flora of the vagina and may flush bacteria higher into the genital tract.

A teen being treated for trich also should be tested for other STIs, and should have time alone with the doctor to openly discuss issues like sexual activity. Not all teens will be comfortable talking with parents about these issues. But it’s important to encourage them to talk to a trusted adult who can provide the facts.

How is Trichomoniasis Diagnosed?

Fun fact: Trich is easily visible under the microscope. It paddles around using flagellae like oars.

Your doctor can determine whether there is a trichomoniasis infection by performing a pelvic or genital examination and by testing a sample of vaginal or urethral discharge. In females, the infection also may be detected on a Pap smear.

Trichomoniasis can be cured with a single dose of prescription antibiotic medication, either metronidazole or tinidazole, which can be taken by mouth. Both sexual partners should be considered infected and treated at the same time, even if one has no symptoms. People being treated should not have sex until they have finished their treatment and no longer have symptoms.

People who have been treated for trich can get it again. About 1 in 5 people get infected again within 3 months after treatment. To avoid getting re-infected, make sure that all of your sex partners get treated too, and wait to have sex again until all of your symptoms go away (about a week). Get checked again if your symptoms come back.

Because many STIs might not cause obvious symptoms, teens often don’t know when they’re infected. It’s important for all teens who have had sex to get screened regularly for STIs so that they don’t lead to other more serious health problems.

If a patient has trichomoniasis, a doctor usually will also test for other STIs like gonorrhea and chlamydia because these STIs sometimes occur together.

How Can Trichomoniasis Be Prevented?

It’s better to prevent trichomoniasis than to treat it, of course. The only way to completely prevent infection is to not have any type of sexual intercourse. Second to that, it’s recommended that you limit the number of sexual partners. Finally, using latex condoms correctly every time you have sex will help reduce the risk of getting or spreading trichomoniasis. However, condoms don’t cover everything, and it is possible to get or spread this infection even when using a condom.

Condoms are the only birth control method that will help prevent trich.