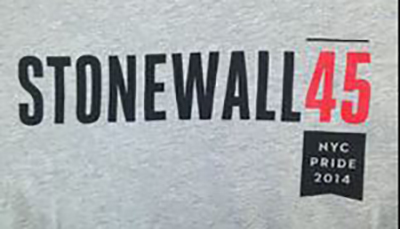 When my friend Fred was a little boy in 1969 in Cincinnati, Ohio, his family got a brand new typewriter. After everybody tried it out, it was finally Fred’s turn, because he was the youngest. So he sat down to plunk out some words and typed a letter to his best friend, Billy.

His father, looking over his shoulder, pulled the paper out of the carriage and ripped it up, saying, “You can’t love another boy.”

At the exact same time in NYC, another police raid was occurring on a gay bar in Greenwich Village. In 1969, it was both illegal to serve alcohol to gay people and for gay people to dance with one another in public. At 1:20 in the morning on June 28, the Stonewall Inn was raided by police; but this time the gay patrons fought back. This became the lynchpin moment of the modern Gay Rights movement.

A year after Stonewall, the first Gay Pride March was held by the Christopher Street Liberation Day Committee to commemorate the riots. I was seven years old and had my first crush on another boy.

For the 10-year anniversary of Stonewall, thousands of people attended the first National March on Washington for Lesbian and Gay Rights. I was a gay teen trapped in my closet. I was different. I was alone, no longer invulnerable to the laughter and teasing of the bullies in my high school hallways.

In 1993, after a decade of AIDS awareness, the government had just passed ‘Don’t Ask, Don’t Tell.’ At that time, I was a young man living with HIV, watching my boyfriend, Michael, die of AIDS. My family didn’t know about him. They didn’t ask. I didn’t tell.

In 2004, for the first time, same sex marriage laws were officially passed in the state of Massachusetts. I was 35 years old and already a public speaker, collecting the stories of other gay teens trapped inside their closets. In one particular email from a teenager named Eric, he described his fear of coming out: “My fingers are shaking as i type these words on my keyboard.” He used a small “i” to describe himself.

“Glee” became the biggest show on TV and Gay/Straight Alliances in high schools were becoming safe havens for teens to freely express themselves. Yet, in every GSA meeting in which I presented, there was always a gay teen in the high school still afraid to walk in the door.

In 2010, 4 more states recognized same sex marriage. At the same time, Tyler Clementi, a Rutgers University student, committed suicide after his sexual encounter with another man was videotaped and displayed.

Last year, Edie Windsor brought her fight against DOMA all the way to the US Supreme Court and won. The Federal Government now recognizes same-sex marriages in states where they are legal. I had the privilege of driving Edie home a few days later where she told me, “If I can’t have Thea (her partner) with me, I get to have the love of the entire community.” Yet many of my transgender friends tell me they still have fear every time they look for a public bathroom.

Today, 19 states plus DC (44% of Americans) have adopted full marriage equality. There has been a significant increase in corporate sponsorship and support from major companies at pride parades. And soon we hope to pass the Employment Non-Discrimination Act (ENDA) which will provide basic protections against workplace discrimination on the basis of sexual orientation or gender identity.

It’s been a time of unprecedented progress. Through the last 45 years, the LGBTQ community has remained visible and vigilant. But with every step forward, there have been many setbacks.

In order to achieve true equality, we must not only remember how far we’ve come, but also honor the lives of those along the way who stood – and are still standing – in the shadows.

This week, take a moment to type the words, “I love you.”

And as you do, pay attention to the struggle and the grace which gave you the freedom to type those very words.