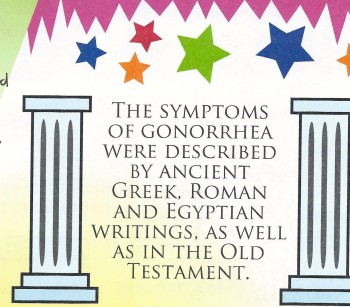 This week’s STI topic is PACKED with many fun tidbits of trivia, so if you have the stamina to read the entire post, I promise to make it worth your time. You may just stumble upon some great stuff that I’ve thrown in. Here goes…
[divider line_type=”Full Width Line” custom_height=”35″]
Gonorrhea is hard to spell! Maybe that’s why there are so many slang words for it. It’s also called the ‘clap’, ‘a red hot poker in the pipe,’ ‘pissing broken glass or like razor blades.’ Gonorrhea is caused by a bacteria that lives on warm, moist parts of the body such as the anus, vagina, penis, mouth, throat and urethra.
But first, here’s some interesting info for the next time you play ‘Trivial Pursuit: The STD Version”
The Old Testament, Leviticus, Chapter 15, devotes several verses to what is almost certainly gonorrhea!
“When any man has a running issue out of his flesh; because of his issue he is unclean…then he shall number to himself seven days for his cleansing and wash his clothes and bathe his flesh in running water and shall be clean.”
And here is a suggestion that the myth of the catching something from a toilet seat happened in Biblical times, from the same chapter!
“He that sitteth on anything whereon he sat that hath the issue shall wash his clothes, and bathe himself in water.”
So gonorrhea seems to have been around a long time! In fact, it was recognized by sages and historians such as Hippocrates, Plato and Aristotle for many centuries before Galen named it gonorrhea in 1526 from the Greek = seed and flow.  (Back in those days, mucous discharge was mistaken for semen.) 353 years later, in 1879, scientist Albert Neisser obtained experimental evidence about the pathogen for gonorrhea so the full name is Neisseria Gonnorrhoeae.
It kind of rhymes!
[divider line_type=”No Line” custom_height=”35″]

How Is It Transmitted?

How Does a Girl Know She Has It?

A female who has gonorrhea may have no symptoms at all or her symptoms may be so mild that she doesn’t notice them until they become more severe. In some cases, females will feel a burning sensation when they urinate, or they will have a yellow-green vaginal discharge. There also may be vaginal bleeding between menstrual periods. Some experience frequent urination and abdominal pain, as well. Remember: 50% of women show no signs.
If the infection becomes more widespread and moves into the uterus or fallopian tubes, it may result in an infection called pelvic inflammatory disease (PID), which can cause abdominal pain, fever and pain during sexual intercourse, as well as the symptoms above.
[divider line_type=”No Line” custom_height=”35″]

How Does a Guy Know He Has It?

Guys who have gonorrhea are much more likely to notice symptoms, although a guy can have gonorrhea and not know it. Guys often feel a burning sensation when they urinate, and yellowish-white or greenish discharge may ooze out of the urethra (at the tip of the penis).  A guy may feel like he wants to urinate but can’t or only can a little.  Discharge in acute gonorrhea starts as a slight bit of mucus, developing into full-blown pus after a day or two – off-white and staining the underwear.
Here’s more trivia for you: clinic workers recognize the “tissue paper” sign – when a man attends with a piece of toilet paper on the inside of his underwear, the diagnosis is gonorrhea until proven otherwise.
Dysuria (which is a fancy word for “painful burning during urination”) is a classic symptom of gonorrhea but we rarely see patients complaining of the really severe discomfort mentioned in the old textbooks.  50% do not mention any discomfort at all.
[divider line_type=”No Line” custom_height=”35″]

How Long Until There Are Symptoms?

The incubation period, the time between infection and the development of symptoms, has progressively lengthened since the 1930s. In that pre-war era, an infected person noticed something wrong within 2 or 3 days. By the 1990s, the average time had increased to a few more days.
Symptoms usually appear 2 to 7 days after a person has been exposed to gonorrhea, and in females they may appear even later. In some cases, they can appear up to 14 days after the initial infection. No one knows how soon you are infectious, but there have been anecdotes of transmission within an hour or two of catching gonorrhea.  It is best to wait at least three days and some say a week, for detection.
Remember, many people experience no symptoms, especially with gonorrhea of the throat. However, a sore throat can be a symptom of the infection there.
Infection of the throat is not associated with any particular symptoms, although it seems that men or women who practice oral sex are more prone to sore throats than others.
Gonorrhea of the rectum tends to produce no symptoms in more than 80% of men or women infected there. Some notice pus on their feces and others may complain of a little dampness or itching around the anus, but most are unaware of their infection.
[divider line_type=”No Line” custom_height=”35″]

How Is It Detected?

Gonorrhea can be very dangerous if it is left untreated, even in someone who has mild or no symptoms. In females, spread of infection inwards to the uterus can give rise to endometritis, followed by involvement of the Fallopian tubes, salpingitis, and into the pelvis to cause pelvic peritonitis. Chlamydial and gonococcal salpingitis share the same signs and symptoms; both infections may be found together in the same patient and both may lead to ectopic pregnancy, scarring or infertility. Gonorrhea infection during pregnancy can cause problems for the newborn baby, including meningitis (an inflammation of the membranes around the brain and spinal cord) and an eye infection that can result in blindness if it is not treated.
And, if you’ve read this far, here’s some more trivia for you:
A woman’s ovaries are as sensitive as a man’s testicles and are normally protected within the bony pelvis; but there are certain occasions during sex when the erect penis will bang the ovary. This is known as ‘anvil syndrome’ after the metal block on which a blacksmith fashions a horseshoe.
In guys, gonorrhea can spread to the epididymis (the structure attached to the testicle that helps transport sperm), causing pain and swelling in the testicular area, known as epididymo-orchitis.  This can create scar tissue that might make a guy infertile.  Guys are less likely to develop blood-borne complications but may develop infection of the various glands in the genital area, including the Littre’s glands inside the urethra and Cowper’s, Tyson’s and the prostate gland.
In both males and females, spread of infection internally can give rise to the Fitz-Hugh-Curtis syndrome, a condition in which the lining outside the liver becomes inflamed, a ‘peri-hepatitis.’  Rarely, gonorrhea spreads via the bloodstream to elsewhere in the body, usually the skin and the joints. It can affect other organs and parts of the body including the throat, eyes, heart, brain, although this is less common.
[divider line_type=”No Line” custom_height=”35″]

At the beginning of the 20th century, gonorrhea could be seen using the microscope and a diagnosis made in this way was very likely to be correct. It was possible to grow (culture) the gonococcus, the bacterium, in a laboratory. But this sort of “horticulture” is time-consuming. It takes a good 48 hours for gonococcus to grow and it is expensive in labor and equipment. Now it’s a NAAT – nucleic acid amplification test (more trivia!!) which detects part of the bacterium rather than the whole organism. The tests tend to be highly sensitive; if the infection is there, they will find it.
If you think you may have gonorrhea or if you have had a partner who may have gonorrhea, you need to see your doctor or gynecologist. He or she will do an exam which may include checking a urine sample, or for a female, swabbing the vagina or cervix for discharge, which will then be analyzed. Talk to your doctor about which test is best for you. The doctor may also test for other STDs, such as syphilis or chlamydia. Let the doctor know the best way to reach you confidentially with any test results.
In more understandable terms, a diagnosis can be performed in days simply on a sample of urine, if it’s a urethral infection. A doctor will need to take a culture from the back of throat, if it’s an oral infection and from the anus, if it’s an anal infection – whether or not there are symptoms.  Blood tests are discounted; none are reliable.
[divider line_type=”No Line” custom_height=”35″]

How Is It Treated?

If you are diagnosed with gonorrhea, your doctor will prescribe antibiotics to treat the infection. Anyone with whom you’ve had sex should also be tested and treated for gonorrhea immediately. This includes any sexual partners in the last 2 months, or your last sexual partner if it has been more than 2 months since your last sexual experience.
If a sexual partner has gonorrhea, quick treatment will reduce the risk of complications for that person and will lower your chances of being re-infected if you have sex with that partner again. (You can become infected with gonorrhea again even after you have been treated because having gonorrhea does not make you immune to it.)
It’s better to prevent gonorrhea than to treat it, and the only way to completely prevent the infection is to abstain from all types of sexual intercourse. If you do have sex, use a latex condom every time. This is the only birth control method that will help prevent gonorrhea.
[divider line_type=”No Line” custom_height=”35″]

The information above was gathered from these great resources. I encourage you to check them out if you want to keep learning!