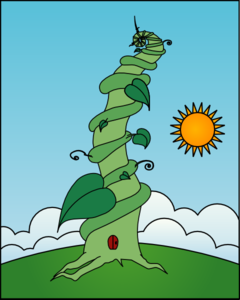 I met a woman who decided to plant a bean garden one summer.

She planted shortly after the last spring frost in a soil temperature of exactly 50 degrees. Carefully, she placed the seeds into the ground, one inch deep and two inches apart, as instructed, covering them with soil to keep them warm. Then she painstakingly constructed a 16 foot long by 5 foot tall “cattle panel,” which is a portable section of wire fence, so that beans could climb with ease. She mulched the soil to retain moisture and made sure it was well-drained. She watered her bean garden regularly and weeded diligently.

In the end, after all her hard work, she yielded only three beans. So when the last spring frost arrived the following year, she decided not to plant anymore seeds.

One day, after a late summer rain, a neighbor knocked on her door.

“Are you the person who planted a bean garden in your yard last summer?” he asked. “I notice that you didn’t plant this season.”

He explained that he would pass her house every day on the way home from work and was so inspired by the 16 foot long by 5 foot tall trellis she had constructed that he set out to plant his own bean garden.

He was overrun with beans!

This week, tend to your miracles and watch where they grow.